Improved fog of war
In previous versions fog of war was simple in that areas that were explored and not visible, only hid units. If a tree was chopped down or a new building constructed, this was revealed through fog of war. This meant that you only had to explore the map once to see where the enemy expanded.

In this version, whenever an explored area is no longer visible for any allied units or buildings, the game creates a snapshot. See the image below for an example of what this means:

Siege armour
Adding siege armour is our first step towards working on walls and siege units. Siege armour will make it easier to balance this aspect of the game.

Multiplayer game over statistics
Now you can analyse further how the match played out.

Which farm is mine?
The farm indicators now give a (green) hint to show which farms any selected villagers are currently owning. 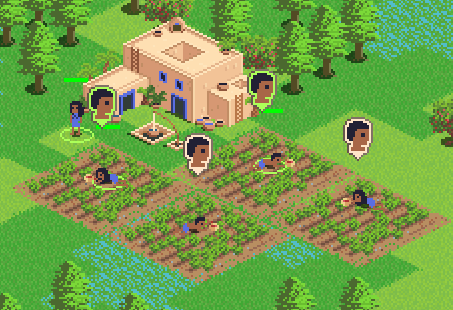 Improvements
- Added snapshot system for explored tiles that are not visible for any allied units or buildings
- No longer showing data in UI about selected object if not visible
- 'Move to arrow' animation now points to object, if hovering any, instead of position, so it's more clear that you selected to move to the object you're hovering
- Added siege armor to buildings that reduces damage taken
- Updated description of Baked Clay Bricks technology in Technology Tree
- Showing player statistics after multiplayer game ends for each player: food, villagers, warriors, unit kills, units lost, technologies, equipment
- Added building destroyed smoke effects
- Added building destroyed sound
- Now showing a green hint on all farm taken indicators whether any selected villagers are working on any of the farms
- Spectator no longer gets under attack messages if teammate is under attack
- Hiding all stats about selected unit in UI that is not currently within any unit or building visibility