This update is one of the largest updates we've yet to release, with general improvements, new content, balance changes and bug fixes!

Since there are so many changes to the game overall, we are going to spend some time to monitor the game balance (and any issues that arise) for the upcoming Christmas tournament, Crescent Cup, a tournament that the Discord community is arranging. We'll post separately about the tournament soon, but if you're keen to know more, join our friendly Discord community:

Palace and priests
The Palace is a new important building:

Building icons are also remade in a different style to make it much more obvious which button selects which building. 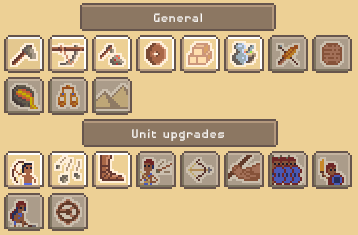 Unit upgrades
Militia and composite bow are unchanged, but we've added a unit upgrade to every other unit in the game (except Scout):

Palace
- Added new building 'Palace'
- Palace adds 8 housing
- Palace unlocks advanced village improvements in technology tree
- Palace unlocks training of advanced military units
- You can only operate one Palace at a time
- If Palace gets destroyed any current advanced village research or advanced unit training gets cancelled
- You can garrison up to 5 villagers in palace to work as priests and generate 0.2 knowledge each (0.4 when Scribes (formerly Writing) has been researched)
- Whenever villager is selected an indicator pops up over palace that shows number of garrisoned villagers

New in-game UI
- The new UI has smaller elements, which allows for more information to be showed at once as well as for the UI to take less map space
- All icons have been updated to fit the new UI
- Passive unit upgrades like militia, composite bow and new unit upgrades now show below unit portrait with tooltip if hovering with mouse
- Unit training tooltip panel now shows how much housing is required to train the unit
- It is more obvious in production tool cost boxes if you have the required amount of resources and not
- Added select all idle villagers button next to select idle villager button
- Construct building button icons are now more symbolic so it's easier to see which button refers to which building
- Bottom controller UI now shows food consumption for units
- Increased number of queue slots for production buildings to 9 (from 5)
- Building stats like siege armour is no longer hidden while producing units or equipment
- Moved technology, equipment, defeated ally and defeated (self) notifications to top-left (from middle of screen)
- Only showing bottom and bottom right hud sections when they're relevant

General improvements
- Made a small change to one of the dwelling sprites so that it's less confused with resource camp
- Added new sound effects to select and move battering ram
- Health bars show closer to unit
- Idle indicator now pops up over idle villagers
- Click to move indicators now render on top of unit health bars
- Building no longer finish production of units unless it borders at least one empty node
- Building will always spawn produced unit at empty node that is bordering building
- Improved large groups of units passing each other (it looks better, is more efficient, and has better performance)
- Enabling raze construction button as soon as building has been placed (previously when constructed)
- You can now see enemy building's siege armour

Cool update! Can't wait to check it out!