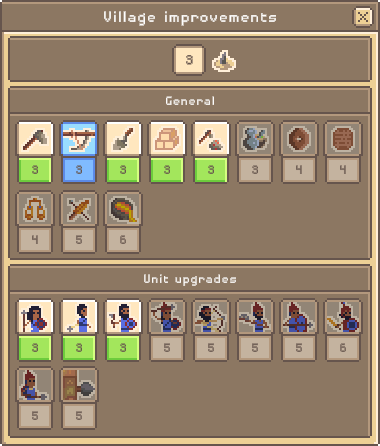 Multiple new ways of playing have been made possible by introducing this knowledge points system. For example, you don't have to decide what to research straight away. This means you can scout your surroundings, your enemy, etc., and have a think at the beginning of the game, before accumulating enough knowledge points, and then decide which village improvement to research first. Another example is that you can also save up points for post-palace village improvements.

We are introducing a new way to win the game: by constructing a Wonder! 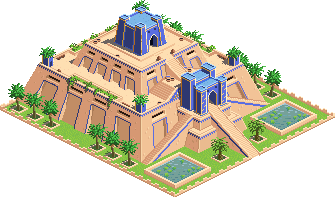 The Wonder has to be constructed in four phases, each costing different amounts of resources.

For the first three levels you construct or upgrade to, you are rewarded with knowledge points, whilst upgrading to the fourth stage wins you the game!

Whenever someone constructs a Wonder or upgrades it to stage 2 or 3, you will be notified of a rumour about this.

Wonder victory can be enabled/disabled when creating a multiplayer room.

Save and load single player mission

Finally, saving and loading has landed! You can now save single player mission sessions and continue later.

Just keep in mind that since this game is still in quite early development, save games might break from version to version, especially when we add new or make changes to existing major features. Thanks for the understanding! :)

We have updated the sound track with new tunes. Listen for these some time after you construct a palace!

This command makes it less frustrating to order villagers back to gather resources, after using them as militia to defend your base against enemy raids. With the click of a button (or hotkey), villagers will now automatically move back to whatever resource they were gathering last, and if the resource was depleted in the meantime, they will automatically look for a new resource of the same type nearby.

Placement of Palace is now a more meaningful choice. With militia researched, all villagers within palace vision range will now automatically turn into militia (like with the Village Center). 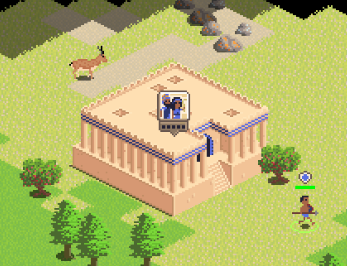 We have analysed data gathered from the release of animals and throughout several weeks of multiplayer games and Crescent Major 2. From this, we noticed a few areas of early game that were impacted by the arrival of animals. Therefore, we've carefully made some general changes to make early game (in our opinions) more interesting.

We have also done a more comprehensive cost benefit ratio for each unit, as well as considered their unit roles. We are continously trying to make sure units are given a meaningful place in the game, as well as making then feel good (and fun!) to use. Exepect quite a lot of changes to units in this build!